2As promised after such a long time (two weeks to be exact), I’ve finally managed to burst out of that horrible bubble that has been keeping me away from not just the blogosphere but the internet / my laptop in general. Much apologies everyone who was starting to worry about me, including my much beloved #crazyaunties. =D
But I’m back now and I will get my lazy bum off the bed and start blogging frequently again! The bf and I headed off to Austria on the 29th of September and this was an unplanned trip, for me at least. We flew into Linz and spent one night there as it is cheaper to fly into Linz rather than into Vienna.
We promised ourselves we’d travel cheap this time round and here’s a shot of my favourite place for food shopping – Billa. 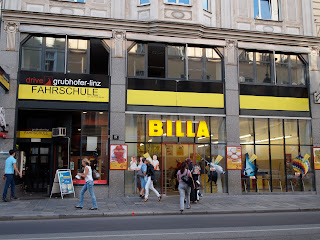 This is the amazing place where the bf and I bought most of our food with my favourite being the Leberkase (Liver Meat Loaf)!! They usually have two variants, the one on the left being the ‘original’ unflavoured one and the other being a Cheese flavoured one! The bf favoured the Cheese but I’m all out for Original! =D
p/s: we didn’t even know it was made out of liver. I was like ‘gasp meat loaf I want some’ and only after we bought it the bf looked into his guidebook and went
‘it’s made out of liver.’
me: +__+ nevermind too hungry must try. 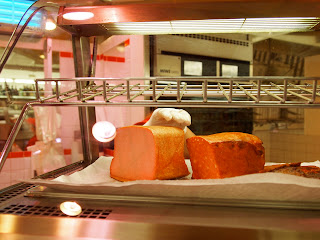 Our first ‘meal’ in Linz! 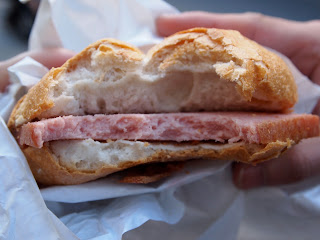 I don’t know about this but the bf thinks it tastes like a more delicious version of luncheon meat. I haven’t had luncheon meat before (okay maybe once many many many years ago) so I can’t say if that’s true!
As we were walking down the streets, this durian-like thing caught my eye but the bf refused to let me try it as he said
‘I thought we were meant to be on a budget’
T___T 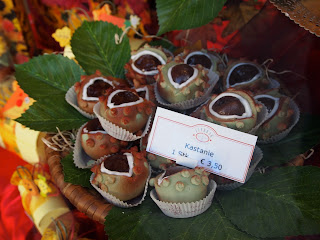 It’s probably some chestnut thingy…. Can anyone please enlighten me? 😉
We stumbled upon many things during this trip and the gluttonous me ‘stumbled’ upon this fat-filled crumbly cheese pastry sold at some very old, famous bakery that had a queue. =D Queues would mean the stuff’s good, right? 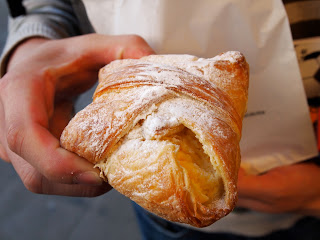 We spent €2,10 on this. The bf kept berating me for buying it as our Liver Meat Loaf only cost €1,95 and ‘it wasn’t that nice anyway’, according to him. Hmph at least it fulfilled my craving! =D
As we didn’t do much research on Linz, we decided to go wherever our legs took us. We came across one too many churches during our trip and were lucky enough to catch a pipe organist rehearsing: 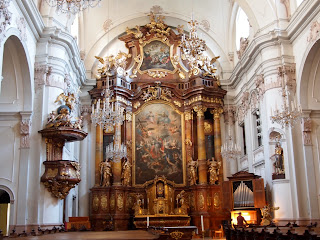 This ignited a pipe organ frenzy in the bf who then insisted we’ve got to step into every single church in Austria in hopes of hearing another pipe organist play.
+___+
Oh, churches in Austria are a lot prettier than churches / cathedrals in the UK as they have more paintings instead of statues that intimidate / depress me a little. If I’m not mistaken, churches in the UK are Anglican whereas the churches in Austria are mostly Catholic. Do pardon me if I’m wrong as I’m not a Christian and I am a sucker for shiny, pretty things =p
We later discovered most, if not all of the churches we went into during our visit to Austria are pretty similar to the one above, as you shall see in many photos to come! =)
We lit candles in this particular church as I do like the idea of ‘lighting’ up one’s way. =) We paid 80 cents to do so =) 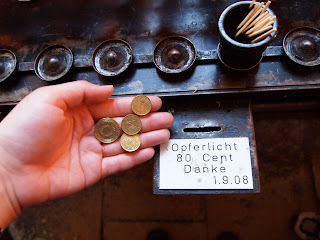 The map we got from our hotel with our already lit candles. 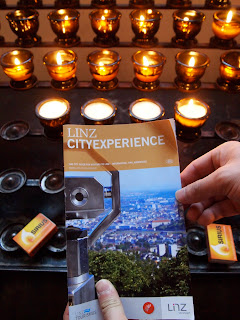 Here, you can see the Church of Saints Michael and Ursula in the distance. It’s also the same church where the pipe organist was rehearsing 😉 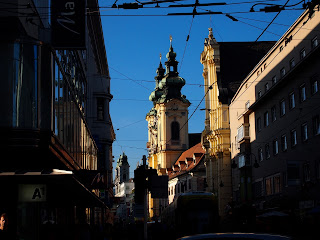 Luckily for us, we purchased a 24-hour ticket so we could take any form of public transport around the city!
Here’s a shot of one of the many trams we hopped onto: 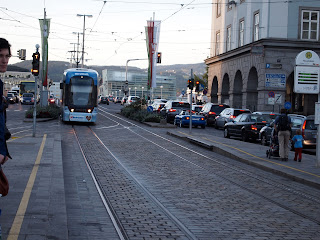 We both found public transportation in Austria extremely efficient and well-connected. The tram cables that stretch across the city illustrates my point: 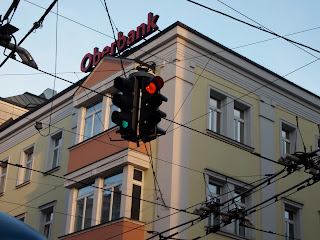 Actually, I took this shot because the dangling traffic light caught my eye. We don’t really have such traffic lights in Malaysia, do we? As I looked up I thought:
‘That would make quite a pretty pendant’ #random
LOL!!
We then scurried back to Billa for dinner! Not wanting more meat loaf, we asked the ladies working at the Delicatessen counter for recommendations and this lovely lady (who speaks English, thank goodness) recommended this ham: 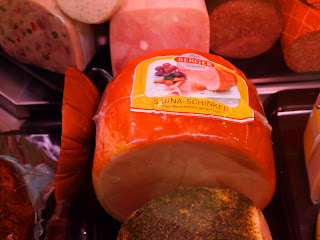 She then recommended we try different buns so here are the buns we chose: 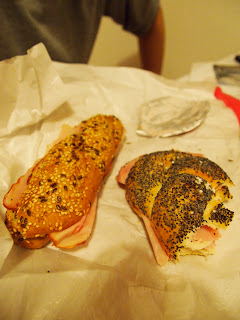 Hehehe a good chunk of the poppy seed with rock salt bun was devoured by yours truly before I thought I should take a photo! =D The two sandwiches cost us €3,00 and was surprisingly filling despite the size!
Here ends our first day in Austria. Nothing much was done other than walking around, surveying souvenir prices and buying food from Billa =D