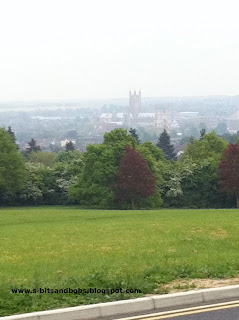 Today is a day of unexpected shock. I woke up in shock, even though I wasn’t late for work, got dressed in a hurry and got lunch sorted and decided to walk out to the bus stop EARLY so I won’t miss the bus.
But what do you know. As I was coming out of the junction leading towards the bus stop, I saw the bus. IT SPED RIGHT PASSED ME AND UP THE HILL.
Me: T__T I woke up early only to miss the bus?!? SHOCK NUMBER TWO.
Walked up today and it was surprisingly chilly. Didn’t put on a scarf as I assumed I was early enough to catch the bus. Le sigh.
If you squint at the photo you might be able to catch a glimpse of the Canterbury Cathedral =)